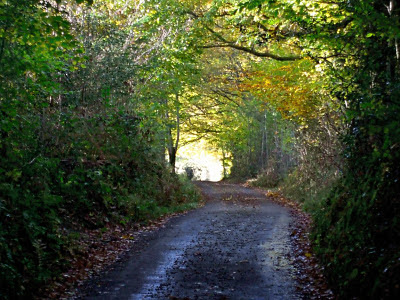 I was away on retreat during the screening of the BBC documentary Young nuns, but made sure my community would tape it for me to watch on my return. I've now watched it twice, discussed it and also read and listened to the various reviews and radio programmes expressing interest in it. The programme featured two young women hoping to enter religious life: Clara, who entered and subequently left an enclosed monastery, and Catherine, who couldn't decide whether to apply to join a Dominican convent, eventually did, and was very sensibly told to wait a year and test her resolve. We also followed some beaming young Franciscans, joyously on mission in Leeds.

Regretfully, though, when I watched the programme I was disappointed. Partly this was due to being wearyingly unsurprised by the choice of congregations - yet again, we were presented with only one facet of contemporary religious life. Of course, those of us whose lives can appear ordinary and undramatic know we are not sufficiently televisual: interior changes and challenges must be harder to turn into "good TV". But it can be done. Fifteen years ago, when I was one of four novices, a team from Thames TV had the vision and imagination to look beyond externals, and made a short feature about us - but - judging by so many other programmes - they were clearly journalistic exceptions.

But my main disappointment was the dawning realisation that whenever the two young women spoke about their motivations, four things were missing: four incredibly important things which are the fundamental basis of a religious vocation - love of God, Jesus, prayer and - of course, crucially - call. Separately or together, however they may be expressed, they are the explanation, the reason for doing this seemingly mad thing. That's why I watched it a second time, to make sure I hadn't missed anything. And why I'm left with the question - what happened, in both the filming and the editing?

I heard them talking about seeking fulfilment - but not about seeking God, much less of falling madly, passionately in love with God. There was talk from one of doing the will of God, but neither spoke of a strong, deep sense of call - the sense that this is what I was created for. And I did not hear anything about a loving, personal relationship with Jesus, nourished by prayer and the Eucharist. Luckily, we had the Franciscan sisters to tell us about these things, with unaffected simplicity; we also heard about God and faith from Clara's dignified yet distraught parents. But if the programme makers aspired at all to present the viewing public with something explaining just why a young woman would want to enter religious life today, then I'm afraid they failed.

To anyone not "in the know", what these women were doing must have seemed utterly incomprehensible. Joining the monastery looked like such a grim and cheerless process; why would anyone put herself through it, unless she believed that therein lay a source of deep, unending joy? Why would a young woman leave all those she loves... except for a greater love? Why on earth would she say no to so many possibilities... unless she was saying yes to "the one thing necessary"? Sadly, we were never told.

I struggle to believe that these sincere, committed young aspirants never once mentioned love of God, love of Jesus, prayer or call. So, what happened, in both the filming and the editing? Did they stumble, becoming shy and inarticulate, causing those parts to be cut? Or was the conversation steered in a different direction? Whatever... it's a real pity, because it could have been a golden opportunity to present something of the profound joy and mystery of finding one's treasure, and embarking on the awesome adventure that is religious life.