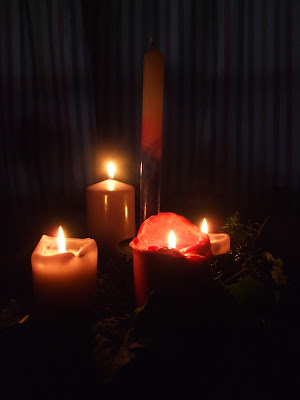 It's the fourth Sunday of Advent... which means four candles - plus holly, ivy, rosemary and other greenery from the various shrubs and trees around my home. Only five days to Christmas, and - oh bliss! - I have written all my cards, done my shopping, wrapped my presents.  There are still a few things I would like to clear between now and Christmas day, but they're not urgent. All that remains is finding something to share at Veillée, and that's a pleasant task which won't take me long. So I can look forward to a few slow, quiet days of looking forward, settle into those final few days of hope-filled anticipation.

And I have a feeling that the leap of anticipatory joy within me just at the thought of this coming week is probably as good as the actual time of anticipation will be...


Readers of this blog from the UK, especially those living here in the 1970s and 80s, will no doubt have chuckled at the mention of four candles. In the days of only three TV channels The Two Ronnies were an important part of my childhood and teens, and Four Candles - set in the sort of ironmonger found in almost every parade of shops at that time - was one of their most iconic sketches. Their humour could be gentle, intelligent, bawdy or absurd, but never cruel - and their Christmas specials, after Morecambe and Wise, united a nation around the TV. Here it is, courtesy of YouTube.