In praise of... equinox liqueur 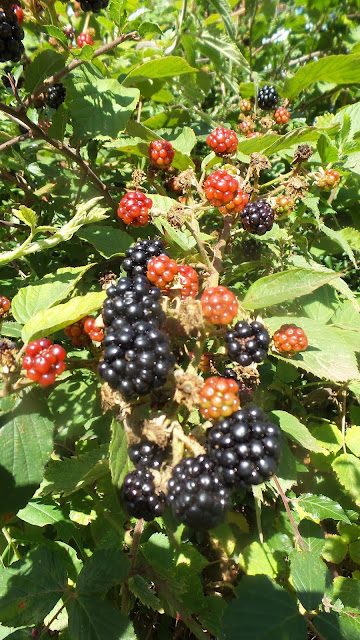 My rural foremothers would have spent much of these past few weeks pickling and preserving everything in sight, in anticipation of a long, hard winter, before helping their menfolk turn the grape harvest into robust and fortifying wine. I have somehow combined the two: finding myself with a glut of blackberries - as I did in 2016 - I have marked the onset of autumn by spending the past month making blackberry liqueur.

I had picked the blackberries during my retreat in Llannerchwen in mid-August. They were plump and plentiful, purple-black and well ripened by the summer-long heatwave, which was just coming to an end. I began to make the liqueur a few days after I returned home, during the August bank holiday weekend, sifting through then mixing the berries with alcohol, adding vanilla, a few cloves and strips of lemon peel. By then it was beginning to feel cooler; it was by no means cold, but after more than two months in a mostly urban furnace, normal late summer weather took a while to get used to.

Over the next few weeks I left the mixture to infuse, stirring it from time to time. In its not yet-ness it seemed to echo the time of year: those lovely weeks when we live in a liminal, betwixt and between, not-quite season, as summer gradually flows into autumn - or is it autumn which seeps into summer? The sky was at times brilliantly, cloudlessly blue, the sun gracing us with strong, frequent bursts of warmth. But part of this betwixt season's beauty lies in its autumnal signs, in leaves beginning to turn russet and gold, a chill in the morning air and earlier sunsets, and Michaelmas daisies running riot. It's as if autumn has set out to woo us; to make us forget the bitterness of last winter's cold, and its dismal darkness, by beguiling us with samples of its loveliest colours, enhanced by sunlight.

Last week I strained the mixture, trying to wait patiently as it dribbled and dripped its way through coffee filters, somehow resisting the temptation to rush, thereby allowing more sediment through. (Inevitably, of course, some did get through; some always gets through). The liquid had been immediately stained by the berries, but the taste of raw alcohol dominated. I recalled the first time I'd made this, when I'd tasted and despairingly wondered what had gone wrong, before remembering that I had yet to add the sugar.

That - the final step - happened yesterday, after the second straining. Once again the mixture dripped, infinitesimally, while I blended what would become a sticky, sickly-sweet syrup. Once again I marvelled at the ruby redness of those first drops, glinting in the light, darkening to deep wine as the liquid increased in density. And then the syrup and the alcohol met; sweetness and tartness, light liquid and heavy syrup, each one fusing into the other's embrace, each beginning to draw out the best in the other.

Yesterday was the autumnal equinox, a moment of balance between the seasons. The weather may at times be topsy-turvey, but there is also a reassuring stability around these predictable points of the year - even though, from today, autumn is ascendant, ushering in winter's darkness. It seemed a good day for bottling my liqueur: summer's fruits, which had begun their ageing during the season's end-beginning time, now ready to begin a further two-three month ageing. Maybe we will try some in November, as we celebrate Philippine and the Society's birthday. But according to the recipe, the liqueur will reach optimum sweetness and maturity in twelve weeks' time, which brings us to mid-December, when winter's grip is at its darkest, and the world awaits the arrival of its one, true, unquenchable Light. And what better time than Christmas to open a bottle of something filled with summer and sweetness, as well as warming fire; fruits of the earth strained clear and jewel-like, and bottled on a day of reassuring balance in the seasons' turning...?

autumn flora and fauna food and feasting in praise of... seasons and weather summer