Blinded by fear, dazzled by grace (the parable of the wren) 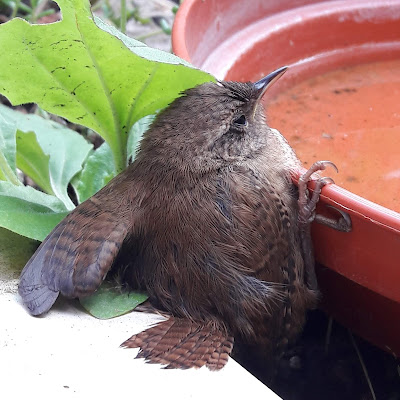 My social media friends will recognise this photo, which I shared the other day, with accompanying story. This little wren had hopped in through the open kitchen door while I was cooking, looked inquisitively around then took a couple of hops to one side. And then he panicked, maybe overcome by his boldness, and tried to escape, hurtling himself at the closed half of the door. He retreated further along, and continued throwing himself with loud thumps at every bit of glazing... except for the double doors, now both wide open, which I was trying to guide him towards. Increasingly distressed and disorientated, he resisted all my attempts to help, until he was so stunned and exhausted he could barely move a feather.

And only then was I able to wrap a tea towel around him and carry him out to the garden. For several minutes he was motionless, apart from his frantically beating heart, though he eventually let me coax him onto the water bowl, to which he clung, rigidly still. I wondered if he was struggling to believe that he really, truly was safe and alive, and back in the outdoors he'd been so desperately, painfully trying to reach by his own frantic efforts.

And then, all of a sudden, he looked up, eyes wide open, and within seconds he'd flown away, finally able to savour his deliverance.

I've thought about that wren several times since then. Because really, when we find ourselves before God, and his overwhelming, unconditional love; when we feel that God might be calling us to something new, or bigger or more demanding, isn't there a bit of that little chap's panicked thrashing around in all of us? Wouldn't he have made a lovely parable, if Jesus had wanted to explain our all-too-common terrified reaction to God's call, and his desire for us? We start out jaunty and inquisitive, fascinated and wanting to see and explore and know this God more - and then we panic. What's best for us, what will bring us untold joy and freedom and the chance to be what we were created for, lies open before us, with God guiding us towards it... and we... we do our desperate best to head elsewhere. We might be blinded by fear of what we imagine God's demands will be; and maybe, too, we've been so utterly dazzled by his grace that we simply can't see the hundredfold and promise lying before us, for us.

But there comes a point when we capitulate: when we allow God to wrap us in the embrace of his love, and to carry us to this place where we have always yearned to be, where joy lies, and freedom; and where we finally learn to let go, and trust the goodness of the One who brought us here...