In praise of... a simple salad

on August 24, 2019
I was about nine or ten when I watched my aunt throw together an extra salad for some unexpected guests. This being Italy, and summertime, her tomatoes were huge cuor di bue - bull's heart, or beef tomatoes, bursting with flavour; the tinned tuna was already soaked in olive oil; the basil picked only moments before it was torn and mixed in. It was simple, easy and only took a few minutes; it was also delicious. I remember one of the guests commenting approvingly that the simplest things are often the tastiest, too. 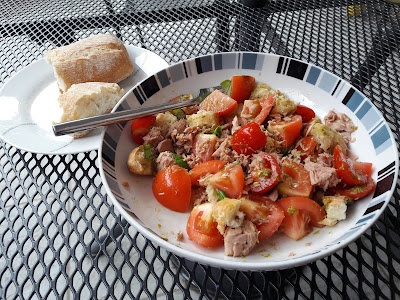 In recent years I have made this salad several times - though rarely managing to use beef tomatoes. I always have a jar of pesto in the fridge so I add some of that, whether or not I have fresh basil to hand (we have some at the moment, in need of being used, which was the perfect excuse for making this on a balmy Bank Holiday Saturday evening). Recently, I have fused it with panzanella, a tomato and bread-based salad, versions of which my mother would sometimes assemble - it was one of several outlets she had for using up yesterday's bread. The bread soaks up the pesto's oiliness and the tomato juices, softening and rejuvenating in the process. Born out of poverty and frugality, panzanella ranks alongside my aunt's salad in terms of ease and simplicity - and deliciousness - so this fusion is a winning combination. Of course, it contains far more than the ingredients I have just described: it contains memories and friendly ghosts, and a nostalgic longing which is both an ache and a sweetness.

And of course, there's fresh bread too, with which to mop the dish clean!

What are the simple, easy, flavoursome dishes - from your childhood or more recently - which make your tastebuds sing along with your soul...?


family food and feasting in praise of... Italy and all things Italian little things memories