In praise of... toad lily promise

on September 09, 2019
In May I bought a little plant at a street market: a toad lily, or - to give it the splendour of its full title -  a Tricyrtis formosana 'Dark Beauty'. At the time it consisted of a single short, slender stem with a few leaves: I bought it not for how it was, but for how it would be; for its promise of delicate beauty, though I had no idea when exactly that promise would be kept. I was also strangely attracted by its deeply unattractive common name - 'toad' and 'lily' not being words I would normally use to describe the same thing. It's what we'd call an unpromising name.

According to the information I found, toad lilies enjoy partial or even full shade, and are late flowering; one of nature's bridges between late summer and early autumn. So I planted it in a small trough in a shady corner. Over the next few months the stem grew a couple of inches, adding a few more leaves. Meanwhile, the rest of the garden blossomed and bloomed: poppies, pansies, roses, jasmine, buddleia, sunflowers... a festival of summer colours and scents, though now considerably subdued. Every so often I wondered whether my little lily would join in, or if - as seemed likely - it was merely gathering strength for next year... And then, a couple of weeks ago, I noticed some tiny dark purple buds, no bigger than grains of rice... 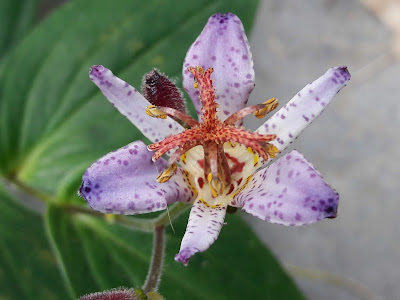 ... And now, as we leave summer behind, the first bud has bloomed. The promise has been kept; and it is indeed a beauty, belying its unlovely name. It's also small, unobtrusive and delicate: a reminder that God's gifts and promise aren't always to be found in what is showy, loud and eye-catching, but in people and places and events which can seem small and insignificant, and are easily overlooked. May God grant us eyes able to see them, and hearts to understand.


flora and fauna in praise of... life in general little things seasons and weather summer