on December 31, 2019
Over Christmas I managed to read my way through several old copies of the Guardian Review. And yesterday I found myself stopping, re-reading and then re-reading again these few sentences in Terry Eagleton's review of Dominion: The Making of the Western Mind, by Tom Holland, a book which describes the history and impact of Christianity:

So, too, must the notion of love. This book is full of saints and martyrs selflessly devoted to others. Only a love of this ruthlessly impersonal kind, which couldn't care less about the gender, rank, skin colour or personality of whoever needs your help, could prove equal to what St John darkly calls the powers of this world: Trump, Putin, Bolsonaro and their lackeys.

Ruthlessly...? It seems utterly wrong to use a word meaning merciless, cruel and hard-hearted to describe the very opposite: love, a word which speaks to us of gentleness, kindness and compassion. Love is warm and tender, ruthlessness ice-cold and stone-hard. And yet... look at the synonyms for ruthless, and you'll see words which can describe the toughest, most single-minded love: fierce, unyielding, implacable and unremitting... A love which doesn't crumble or give way, even - especially - in the face of rage and hatred.

And impersonal...? We always think of love as intrinsically personal, as relational, passionate - and so it is; but as Eagleton reminds us, there is a greater, vaster love which is beyond that. A love which is unbiased, non-discriminatory; which loves regardless of whether someone is worthy or deserving; regardless of whether the loved one is family or stranger, friend or foe, or, indeed, whether the love will be returned. A love which is impersonal because a relationship doesn't need to pre-exist for there to be love. 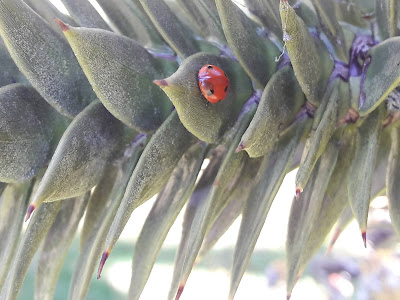 And this is the love, and the power, which can prove more than equal to the powers of this world. In the last century we saw it alive in Dorothy Day and Teresa of Calcutta, in missionaries, campaigners and martyrs, just as we saw its opposite in the Holocaust, apartheid and in dictatorships and totalitarian regimes around the world. Where and in whom do we see this love now? And more importantly, how can we be the ones who enable it to grow and be shared, now?

This has been the final year in this century's teens: a troubled time, filled with cruel populism, darkness and ever-widening cracks exposing yet more division, inequality, prejudice and rage. And into all that, as we step into a new year and a new decade, into Brexit and its increasingly rancorous, complex fallout, we need to fill ourselves, and these cracks, with the power of a love which is as lavish as it is unstinting, as open-hearted as it is fierce. We need the fiery, all-consuming, all-embracing love of those selflessly devoted saints and martyrs - and we need their prayers to sustain us in our struggles. Because love is the only power bequeathed to us by Jesus, the only power of the Spirit... and only love can be our power.

Happy New Year, and happy new decade everyone: may there be many blessings, and much loving boldness in the time ahead...


Late PS: a day or so later, when my friend Br Jim Hayes read the post, he commented that this love - personal and relational, and yet also in another sense "ruthlessly impersonal" - is the love to which our vow of Chastity calls us as religious.

And indeed it is - though, of course, it's never quite put that way.