on January 02, 2020
Thus far, it's been a mild winter, with very few frosts here in London. Since early December crocuses and daffodils have been poking through the soil in our back garden - though they haven't yet had the temerity to consider flowering. Yesterday, on New Year's Day one of my community spotted a few more green tips - premature harbingers of spring's eventual advent. They were a welcome reminder, on such a raw, grey day, of the hope and promise of new life; even though they were also a reminder of the effects of climate change, and our topsy-turvey seasons.

That afternoon I went for a walk, detouring through a small, rather soulless park. As I headed towards the gate, I noticed a distant tree, seemingly covered in... could it be blossom...? In mid-winter?? No, surely that pale, pinkish fuzz belonged to some kind of pastel-y leaves on an improbably exotic tree...? I had to investigate. 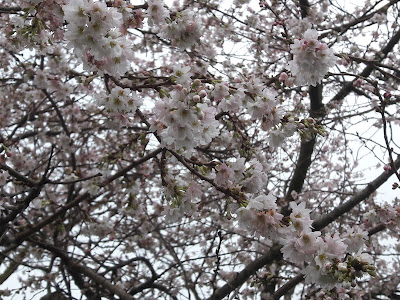 And I found an ordinary, unexotic cherry tree, in full blossom, much earlier than it should be; and a few fat bees buzzing around, making the most of this unseasonal banquet. If the sky had been anything other than wan, the temperature a few degrees higher, I could well have doubted that it was still January 1st. Instead, as with our bulbs, I was torn: between concern about our unstoppably fragile ecosystem; and wonder and delight, at this unexpected beauty, and the hope contained within each bloom.

The night before we had watched the midnight fireworks and revelry on TV. We sang along to Auld Lang Syne, and raised "a cup of kindness" to the New Year and decade, aware that kindness has been in such short supply, in our public discourse, and in a country torn apart by Brexit, populism and inequality. And so this blossom, in a nondescript London park, on a dismal, sunless New Year's Day, seemed a good way to begin the year: with bold, startling loveliness signalling the ever-presence of hope, and tenacity, and signs of spring in even the most unpromising of winters.