Wolf Moon and a magnified gift 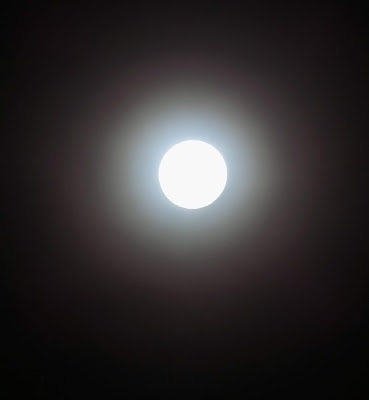 Last night's splendid Wolf Moon - the first full moon of 2020, and of the decade - coincided with a somewhat subtle penumbral eclipse. For a short while the moon shone more softly: it seemed smaller, its aureole diminished, while a shadow grazed one side. And then the shadow passed on, the moon grew larger, brighter, its aureole more radiant, glowing, drawing us in even as it radiated out. I stared, mesmerised, while these words surged up within me:

The sun shall no longer be your light by day,
nor for brightness shall the moon
give light to you by night;
but the Lord will be your everlasting light,
and your God will be your glory.
(Isaiah 60.19)

It was a lovely gift with which to move into today's twenty-fifth anniversary of the day I became a novice with the Society of the Sacred Heart. It also held strange resonances with the gift I'd received a few days ago, and had been reflecting on and savouring ever since. A few words glimpsed on Tuesday, as I scanned my Twitter feed, before my phone blinked and refreshed, and that particular tweet (and - alas! - its author) was lost, though not forgotten; a few words which found their home in my heart.

Referring to Tuesday's Gospel - Mark's account of the feeding of the five thousand - the tweet commented that Jesus takes whatever we offer him, and is able to magnify our gift.

Magnifying the gift... Yes, that is what God has done with the little I have offered him over the past quarter century. He has taken every crumb of love, every trickle of zeal, every fragment of fidelity, whether generously, joyously offered or with extreme reluctance. And God has transformed them: blessed and enhanced, increased and expanded them; and then handed them back, to be shared, widely, extravagantly and without reserve. And once again I am reminded of the hundredfold - God's promise of unrestrained abundance, poured out in ways often beyond our understanding.

God has taken - continues to take - my paltry offerings, and magnifies my gift. And just like Mary in her Magnificat, my response is one of thanksgiving and praise: my soul and all my being does indeed magnify God, who, I know, is and ever will be my everlasting light and my glory.