on February 14, 2020
The heady, intense aroma reached out, embracing me as I struggled up the path with my boxes and bags, welcoming me to my new home. The perfume belonged to an old rose bush, with multiple sturdy, sharp thorns and thick, lushly velvety, deep red petals - a rare, traditional old rose whose scent had not been bred out of it.

It was September 2017 and I was moving back to London. The community house I was due to move in to was in the final stages of a refurbishment; the community living nearby. I was moving into a small, empty house down the road designated for hospitality, whose last long-term resident had been Dorothy Bell, an RSCJ in her nineties who had recently moved to our infirmary community. 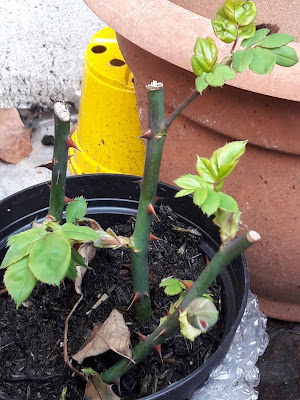 The memory of that intoxicating scent stayed with me, and when we eventually moved into our community house I was determined that at some point we would successfully propagate a cutting from the rose. This finally happened last autumn, thanks to a green-fingered sister: the fledgling rose - affectionately named Dorothy - has been thriving in a sheltered corner and showing signs of contentment - and, thanks to our mild winter, an unbelievably premature little bud, which we spotted at Candlemas. The arrival of colder weather then meant the bud sensibly remained tightly furled... until a few days ago, when I noticed a sliver of deepest red...

Did Dorothy know that today is St Valentine's Day, a day traditionally filled with red roses, those vivid symbols of passion, romance and love...?

Dorothy RSCJ had haphazardly tended her garden for as long as she could. I don't know if she was the sort of gardener who talked to her plants, but if she was, she may well have told Dorothy-Rose, the flower of romantic love, that she had made her First Vows on the 14th February 1950 - seventy years ago today. For years after her mother would send her flowers on St Valentine's Day; the notion that these came from a jilted lover spread among her romantically inclined pupils and persisted! The girls were partially correct: the flowers had indeed been sent with love; the love of parents for an only child called to religious life, whose vocation they were somehow able to embrace, saying If it's her vocation, then it's ours too. 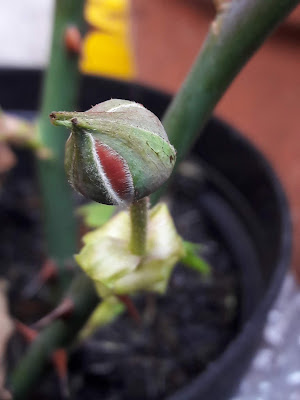 Dorothy RSCJ died almost a year ago, and is undoubtedly celebrating her seventieth anniversary of vows in heaven; reunited with her parents, and in no need of bouquets of flowers to add to her joy or remind her of love. But am I being too fanciful if I imagine that Dorothy-Rose, whom she would have pruned and watered and admired, has remembered the date, and its significance, and wanted to join in the celebration...? Certainly, this tiny, still fragile bud, and its hesitant crimson slash, filled with the promise and hope of new life - however premature, foolhardy and vulnerable to frost - fills me with more joy than a whole vase of forced blooms, and feels like an incredibly slender yet very strong bridge between heaven and earth...