In praise of... albums for bad days

on June 12, 2020
The other day I heard that a novice I'd met last year had just made her first vows, so I emailed her my congratulations, and assurance of prayer. I added that I hadn't been able to pray for her as she made her vows, but that is rarely when we need prayers. Admittedly, I've sometimes heard a sister recall a period of darkness or a huge wobble as she prepared to make her vowed commitment; more often, though, our joy and our gratitude are so immense, and so transformed into grace, that we are carried along, as though on the crest of a wave. So, I said, I would pray for her not on her special day, but as she returns to earth and to ordinary life, and begins to live those vows in the normal, daily round.

Our exchange of emails sparked a momory in me of a very sound piece of advice I'd received shortly after making my own first vows, back in 1996. In those pre-digital days photos were developed; someone gave me a rather nice album, and I duly filled it with images from my ceremony and celebration. Throughout, my overwhelming joy was evident; certainly, it's one of my chief memories of the day, along with my awed, grateful relief that God had seen fit to accept my offering, flawed and limited as it was, and make it - make me - his own.

I showed the album to the elderly sisters in our infirmary community. One sister, a normally taciturn woman with dementia, pored over the photos: she then gazed at me, with quiet intensity, and, indicating the album, said You must keep this, and look at it on bad days. I assured her I would. 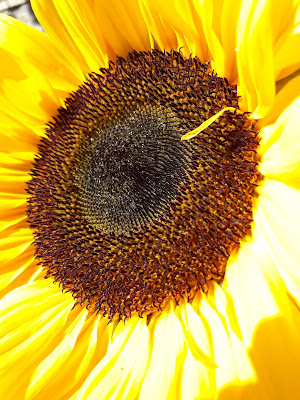 As you can tell, I've never forgotten those words! In fact, I haven't needed to look at the album (or the collages I framed of photos from my first and final vows) very often: not because there haven't been any bad days, but because my memory of the sister's advice has been enough to remind me of the joy she so obviously saw, and which I can still remember feeling. The desire and the certainty at the heart of the hymn which was the psalm at my ceremony has deepened and grown within me, overlaid with moments of the fullness of joy in God's presence, and an awareness of God's enduring fidelity; all these have helped to see me through quite a few bad days.

I don't know how much people print and frame special photos nowadays, and as the newly-vowed sister is a Carmelite, she might have kept very few, if at all. Nonetheless, I will tell her this story, passing on the advice I received. She will undoubtedly hold on to memories of her vows day, or have a particular memory as a lodestar, which she can return to, and which can return her to the joy and zeal with which she said her YES to God's call to follow him in love.

And you; what are your 'photo albums', your memories, that you need to keep hold of and look at on bad days...?