In praise of... summer's final fling

The weather in this country is notorious for not abiding by the seasonal laws, and this strange, topsy-turvey year has not been an exception. Thus, during most of lockdown we enjoyed a gloriously warm spring and early summer: this was followed briefly by a cooler, wetter spell, and then by the end of July, an utter furnace of a heatwave. August was cooler again... then came another, mercifully brief, heatwave... and then some 'normal' September weather. And then, last week, the mercury rose again, to the mid-20s, for one final, sunny, glorious burst of summer!

But for once, our erratic weather patterns have clearly decided to abide by the rules. (Maybe, too, they're trying to match the general despondency at the announcement of tighter Covid19 restrictions) Yesterday it was the Autumn Equinox, the last day of the astronomical summer: here in London the sun shone radiantly from a near cloudless sky, bathing our last flowers and setting leaves resplendently on fire - and permitting us one final, short-sleeved, summer-clad fling. Yes, final... because today, officially the start of autumn,  dawned dull and showery, about five degrees cooler, and forecast to remain in the mid-teens for the rest of the month. Today we can say, in reality as well as officially, hello autumn; you've arrived just as expected.

That's today... but yesterday... ah, yesterday was a day filled with sunshine and light, when we could easily say, with Gerard Manly Hopkins, that

The world is charged with the grandeur of God.
It will flame out, like shining from shook foil...

... and when even something as prosaic as salt and pepper grinders could rejoice in their own glowing, multi-layered halos...! 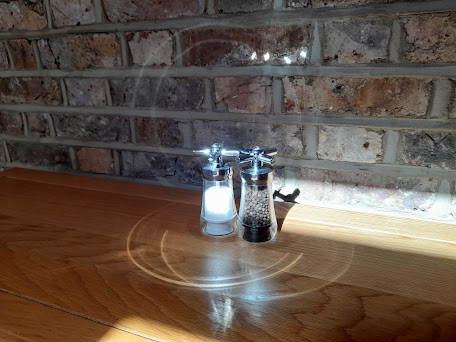 autumn in praise of... life in London lockdown poetry and song seasons and weather summer