on September 01, 2020
Today, September 1st, is often seen as the herald for autumn - and indeed, there was a definite autumnal chill in the air. It's also the World Day of Prayer for the Care of Creation, and the beginning of the now-annual Season of Creation. This year the theme is Jubilee for the Earth - a jubilee being, as Pope Francis reminds us, a sacred time to remember, return, rest, restore and rejoice. 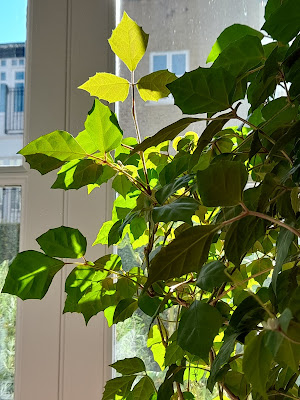 Rejoicing is what we normally associate with the word jubilee - a festival, or a joyous anniversary. And this morning this part of the world seemed to be in a jubilant mood. Yes, the morning was cold, but a brightly pale sun gleamed from a clear blue sky, lifting spirits as it briefly warmed, glinting and gilding and shining through suddenly resplendent, radiant leaves.

It was a glorious morning in which The heavens declare the glory of God, and the firmament proclaims the work of his hands... (Psalm 19)... in which summer and autumn danced and gave way to each other... It was a morning which spoke of hope and life, even as autumn's inevitability ushers in dying... It was an excellent morning in which to renew my faith in the God of creation, and embark on this season of prayer and work for the care of our common home, which, as the Pope reminds us... is also God’s home where his Word “became flesh and lived among us” (Jn 1:14) and which is constantly being renewed by the outpouring of the Holy Spirit.