on September 18, 2020
The other day a plumber came to our house. His company would have just told him he was coming to mend a constantly dripping tap, so he must have wondered at the metal plate by our front door, with our logo and the words Sacred Heart Sisters. He needed to go out to his van a couple of times, so he'd have managed to take a second and third look at it. Shortly before he left, he gestured towards the door and the question burst out: Sacred Heart Sisters - what's that about? The reply, about being religious sisters, clearly wasn't enough - or rather, it didn't answer his real question. Sisters he could understand, but...

No, but SACRED HEART Sisters - what's that about? 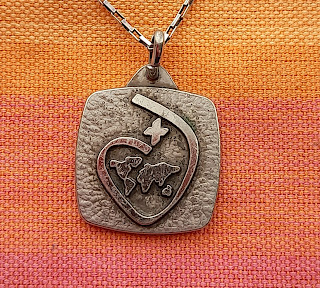 So I held out my medal, and asked him what he saw... A heart wrapped around the world... and told him that's what it's about. You know how the heart is a symbol of love? - in this case the love of God, which wraps itself around the world, holding everyone and everything in it. And we call this heart, this love, the Sacred Heart. He nodded; he said he wasn't religious, but did believe in God. Then, looking again at the medal... And everyone's equal...? Yes; in the Heart of God, and in the love of God, everyone is equal. There are no favourites - or rather, everyone is a favourite!


And not for the first time I gave thanks for the creativity and spirituality of Oonah Ryan, the American RSCJ who in 1988 designed what was to become our international logo. I gave thanks for a logo which is as profound as it is simple; one which can be easily understood and interpreted, and, crucially, enable a man who never speaks of God, to do so. And of course, I gave thanks for the Heart the logo barely captures: that widest, loveliest Heart, which can never be fully contained or explained within one image, just as its love can never be contained within one world... which is why it can wrap itself around it instead.

That's what it's about; what we're about - what SACRED HEART Sisters are about.

And what do you see? What's it about for you?

being RSCJ encounters Heart of Jesus life in general spirituality