I assembled our little crib the other evening, using the same figures we have used for the past few years, but - in a time of social distancing - placing them as close to each other as possible. And beside and above them, a few new additions. 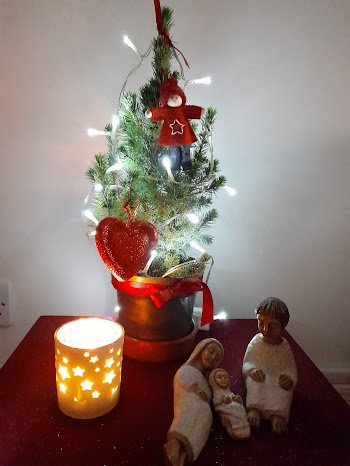 There is a story to the tree. The plastic tree we'd been using had come to the end of its life, and we'd talked about buying a small, live tree in a pot, which we could then move to the garden. There were some on sale in a nearby supermarket: but religious communities rarely put up their decorations before the O Antiphons are underway, and thus, by the time we were actually ready to buy a tree, the shop had sold out! In hope, I set out for another supermarket, where I'd also seen some on sale... At first it looked as though they too had sold out, and then I spotted this little tree, nestling among and  almost hidden by the poinsettia. It was obviously meant to be ours, and I brought it home as triumphantly as if it was a glittering prize. In this extraordinary year in which so much has changed, including the traditions around our religious feasts, an unexpectedly tiny tree makes as much sense as anything else. Christmas trees are traditionally topped by an angel or a star: the little elf, who I found while sorting through a box, is filling both roles, his outstretched arms gleefully welcoming. He and the tiny tree were clearly meant for each other. And the heart? Ah, I had Nigella Lawson's Christmas special cookery programme on in the background while I was winding the fairy lights round the tree. Nigella was making some biscuits, and using little seasonal-shaped cutters to create stars, trees and bells. She half-apologised for cutting out some hearts: I know hearts aren't very Christmassy, but I do like them...

Hearts not Christmassy??!! What is Christmas about if not Jesus, Love Incarnate, that greatest Heart of all, coming to dwell among us, in all our messiness? And what is the Incarnation about if not God becoming flesh because he loves us, and wants us to be transformed into his self-giving, generous love? And so a heart, an exceedingly Christmassy heart, universal symbol of love, was added to the tree!

Yes, our crib is in many ways a new tableau, but I like the fact that the figures haven't changed from last year and the year before. Whatever else may have changed about this Christmas, Jesus, Love, Of the Father's Heart begotten, remains unchanged... just as he remains with us. In a year filled with uncertainties, change and many cancelled plans and broken promises, Christ at least remains steadfastly present, love and kindness are never cancelled, and God, we know, always, faithfully, keeps his covenant-promise.