In praise of... a drop of comforting salt

In years to come, when the people's account of the Covid19 pandemic is being recounted, there will be a pantheon of unlikely heroes - those who made their own mark on the wellbeing and morale of this country. Many of them are people who simply stepped forward at a time when they were most needed. Marcus Rashford will be there, of course, as will Captain Tom; we will also recall, without being able to name them all, the multitudes of health and care workers, key workers and anyone involved in developing a vaccine. There will be others, too, whose names will be spoken more quietly, and many whose names might not be widely known, except to those they have helped, such as all those who provided food relief, helped isolated neighbours or boosted flagging spirits. 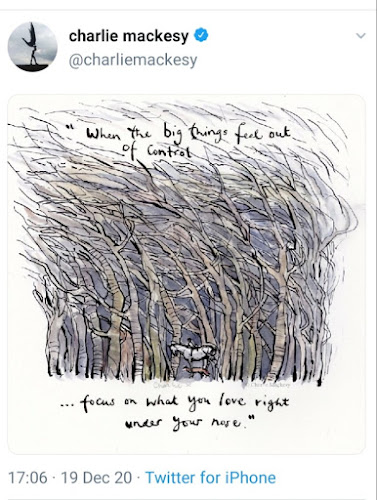 One of these quieter names will belong to Charlie Mackesy, creator of The Boy, the Mole, the Fox and the Horse. Published last year, this book quietly, simply, continues to offer hope, strength and encouragement, and a reminder that bravery can consist in asking for help. Several months ago I began noticing people on social media sharing his illustrations, either from the book or more recent creations for our current needs, with their gently encouraging and reassuring messages. I started following him, to see the messages for myself. And so it was that on Saturday, watching the government's announcement of a new Tier 4 and further restrictions, I glanced down at my phone and saw this tweet. We can do this I added as I re-tweeted it; and yes, we can, on so many levels we can.Earlier today I stumbled across this little video on the BBC website. In it, Mackesy somewhat modestly refers to himself just contributing to that drop of salt... in the soup of someone's thinking... And yes, his contribution to our national wellbeing's soup has never been the biggest ingredient, or the one with the strongest flavour... it isn't the essential ingredient of liquid, either; but where would that soup be without seasoning? It would still exist, but be far less flavoursome and comforting. So watch the video, read the article linked to the second paragraph, and then with me give thanks for all the heartening drops of salt, from so many and varied sources, we've been helped and enriched by during this unprecedented, often frightening year...
Coronavirus current events images in praise of... life online lockdown reading and media