We must always begin again and again with great confidence and an unquenchable hope, ever repeating NUNC COEPI, Now I begin! ~ Janet Erskine Stuart rscj

The rising and setting, waxing and waning of the sun and moon are entirely natural rhythms, as are the changing seasons, growth and decay. But their ordering into specific, named days and months and years is entirely an human construction. I was reminded of this recently, when I read that when the Gregorian Calendar was introduced in October 1582, the adjustment was achieved by wiping out the dates 5th - 14th from that year's calendar (thus, St Teresa, who died around midnight on 4th October 1582 is celebrated on the 15th). And I think of this ordering as we head into a new year. What, after all, makes 31st December so different to 1st January? According to nature, only a few minutes at sunrise and sunset; according to our calendars, they are a turning point, an ending and a beginning; momentous changes, achieved in a matter of seconds. Big Ben - or your national equivalent - sounds out the midnight hour, and suddenly it's a new year, or decade - a new era, a new future.

In a few hours' time, 2020 will become 2021. It's already next year in the Pacific, in New Zealand, Australia and some Asian countries; it might already be 2021 for you, too, by the time you read this. But it's still 2020 as I type this; still the year many people would want to excise, Gregorian Calendar-style, from existence. Psychologically, this is the year when, collectively, we so need the New Year. Of course, nothing much will change tomorrow: infections will still be in the thousands, the death toll in its hundreds; the weather will still be freezing cold; the poor and vulnerable still so. The biggest change, sadly, will be our finalised withdrawal from the European Union, a seismic event which will somehow be caught up in the darkness of the pandemic.

Nothing will have changed... except that it will be 2021. The New Year will have begun, borne aloft by a hundred thousand hopes, fervent prayers and wishes, and the rollout of the two vaccines. And even though their effects will be felt in 2021 I don't want to forget that the vaccines were invented, through commitment and collaboration, in 2020. Not everything this year has been bad, and the outpouring of generosity, the richness of spirit and community, and renewed awareness of the people and things we most value, are what we need to hold on to and bring with us, into 2021 and beyond. 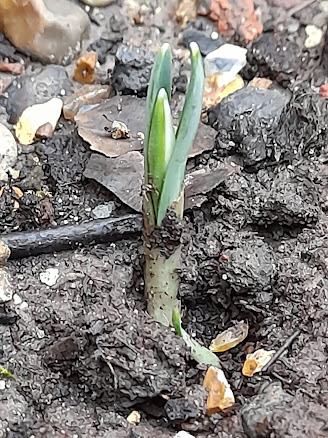 And so the new year begins: an opportunity to begin again, with unquenchable hope and great confidence; an opportunity for us all to repeat, and to live, individually and collectively, Nunc Coepi - now, today, I begin!

Happy New Year everyone, and a happy, healthy and blessed 2021!

PS: In September I gave one of my sisters some snowdrop bulbs for her birthday, which we planted in our garden. We've been keeping an eye on them, especially as they began appearing prematurely. I planted this one in a duller, less favourable spot, and took this photo earlier today - it is, most definitely, declaring nunc coepi!
anniversaries and milestones Brexit Coronavirus current events hope Janet Stuart random thoughts seasons and weather