Prematurity, Sophie and our snowdrops 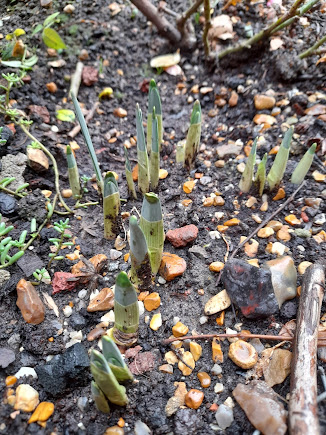 We call them snowdrops, but they're bucaneve in Italian, perce-neige in French: snow-piercers, pushing their way through frost-hard soil in midwinter, flowering from early January. Which is what I tried explaining to the snowdrop tips which began appearing in our garden last month - yes; last month! Maybe they were tricked by our relatively mild late autumn into believing they had accidentally slept through December, and needed to hurry up and fulfill their role as the first and earliest heralds of an eventual spring. Maybe... but in recent weeks their premature appearance seems to have had an accelerating effect on our daffodils and hyacinths as well. They too have been beguiled by mildness; or maybe they're just impatient and fed up with waiting for 2020, and winter, to be over...

I have, of course, expressed my concerns to these bold little blades of green, warning them that they will regret this headlong rush once the frosts and harsh weather arrive. But it's too late. Once they've appeared there's no going back; they can only do their best to withstand any bitterness, and hold on until spring's gentleness appears.

Today, though, I'm thinking about a different sort of prematurity. Two hundred and forty-one years ago today our founder St Madeleine Sophie Barat was born - but she should have waited another eight weeks or so. Just like our spring bulbs, she should have spent another two months in safety and womb-warmth, growing, strengthening and finally emerging at her due time in February. Instead, her mother's trauma at a nearby housefire pushed her out into a world in which neonatal mortality rates were high, even for full-term babies. Her family feared she wouldn't live longer than a day or so; in fact, she managed to outlive most of her contemporaries, dying at the age of eighty-five.

Maybe, just maybe, I don't need to worry about our snowdrops quite so much, after all...