In praise of... hairdressers

Last summer, as we emerged from our first lockdown, I wrote about lockdown hair, and memories of my hairdresser mother, and her clients. I recalled women who battled sickness, loneliness or adversity with a shampoo and set, or splashed out on a perm... and the morale-boosting effects of a good, professional haircut or colouring. Certainly, the reopening of hairdressers and barbers on Monday seemed to be universally and eagerly awaited... And yet, according to a feature in The Guardian, many men are embracing the long, luscious hair of lockdown, and are unlikely to chop off their tousled mops now that they can.

I, on the other hand, was only too happy to do so!

Being blessed with what my mother used to describe as 'a thick head of hair' is fine while it's under some sort of control, and gets a good cut every couple of months... but five months' growth, with different lengths and layers, is another matter. The longer and thicker it became, the harder to tame, and the more my overlong fringe would escape from its restraints in order to flop into my eyes. I tried a hairband or a scarf, but they simply made my hair stick out around them, like an electrocuted cartoon character. Combs - which I used to use in my long hair days - have provided the best control: though even then, as my hair is layered, shorter strands and tendrils would slide their way out from top and sides, bringing others with them, and go their own sweet way (invariably not the way I wanted them to go, either!). And this is without the wayward locks on each side which - even when wedged in by my glasses - still found a way to defy containment. 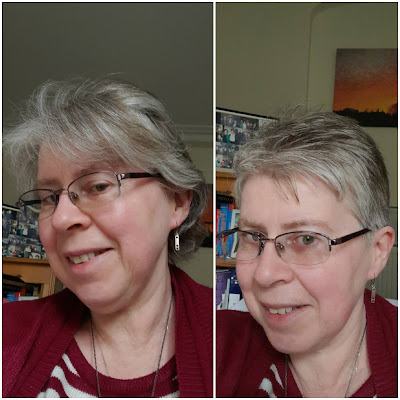 But on Tuesday - oh bliss! - all this tumbled around my shoulders and onto the floor...! In less than half an hour my head was expertly transformed, and it - and I - were left feeling so much lighter. And this, too, despite a parade of distractions: the salon manager was cutting my hair, and somehow continued snipping and clipping whilst also coping with a malfunctioning card reader and myriad enquiries about possible appointment slots. Unlike the calm salons featured in the TV news, here all was frantic activity, and I left with renewed respect for people currently spending ten or more hours each day on their feet, somehow ensuring the twentieth client gets as good a service as the first.
This pandemic has overturned so many of our certainties, including who we now regard as essential or keyworkers. Just as in God's Kingdom, where the last are first and the lowly are raised up, so we now raise up in our gratitude the lowly and the low-paid... and right now, for many of us, that definitely includes hairdressers!

gratitude in praise of... life in general little things lockdown this and that