Last week the Carmelite nuns of Great Britain drew me into a Twitter exchange. Someone had commented to them that the late Cardinal Basil Hume OSB had written - in one of his books - that in every Benedictine monk there should be a yearning Carthusian, and in every Sacred Heart nun, a disappointed Carmelite. What, asked my Carmelite friend, did I think?

I've never read this book, and have no idea whether Cardinal Hume was referring specifically to my congregation, or using Sacred Heart nun as a kind of generic term for apostolic religious. The former is quite likely, though, if he knew something of our history and spirit. As I briefly explained in my tweeted replies, St Madeleine Sophie did originally long to become a Carmelite: but this was in her teens in 1790s France, just after a Revolution which had shut down convents, suppressed much religious practice, and even guillotined the entire community of Carmelites of Compiegne.

Sophie never lost her strong contemplative core, and insisted that the Society of the Sacred Heart should be wholly contemplative and wholly apostolic, its spirit essentially based on - and flowing from - 'prayer and the interior life'. She would regularly speak of too much busyness, and needing to spend more time in solitude and prayer... and this is still a tension experienced at times by RSCJ today. It is also, I imagine, a tension for many others - whether monastic or active - seeking to live a life with and for God.

Several of my sisters did in fact visit Carmelite monasteries when they were discerning religious life. They went in response to a call and a yearning for prayer and radicality: the visits and meetings with the prioress confirmed, though, that this call and longing were to be lived in a more apostolic and unenclosed way. I didn't do this, knowing from the outset that I was not called to monastic life; but over the past few decades I have been increasingly influenced and helped by Carmelite spirituality and its authors. 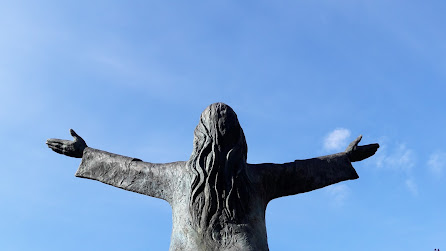 That, of course, is the heart of the matter. Yes, there will always be 'tugs' - times when the grass elsewhere appears greener, or when we want to do or be some elusive something 'more', 'greater', 'better' - but our true joy, fulfillment and flourishing lies in discovering and doing and being whatever we were made for and called to. Nothing else will truly satisfy; however lively or lovely it might seem, disappointment would lie there and not here.

I'll leave the final word with Janet Stuart, an RSCJ and seeking spirit whose seemingly brief life had a profound effect on the Society. Writing to a young woman considering a call to religious life, she said:

If God has really given you a vocation to the Society of the Sacred Heart, then, I think, he has looked through all his treasures and given you the best, because he has called you to a life that is both hard and beautiful - very like his own, and based on friendship with him, the very most beautiful thing in all life. May he give you the grace to be always faithful.

This was true for Janet, who had entered in 1882, and for me, a century later in 1994 - and still true today. And you, reader - whatever God has called you to, may you too know that God has looked through all his treasures and given you the very best for you... and may he give you the grace to always be faithful and flourish, and not be disappointed.