To God be the glory

We sometimes refer to ourselves as the Class of 96: several religious, most of whom met at an inter-congregational novices course, who made our first vows in 1996; which means that last year - incredibly - we became silver jubilarians. I say 'incredibly', not because I never believed that God's promises would be fulfilled, but simply because, twenty-five years ago, being a jubilarian seemed like such a venerable (and old!) thing to be - and I and my friends are neither venerable nor old.

Last Saturday four of us were at a meeting with several other religious from different congregations. As the day ended and we took our group photos, four of us from the Class of 96 posed for one final Silver Jubilarians picture. And as we stood in our row one sister murmured what could be the perfect caption: One hundred years of fidelity. Indeed yes; 4 x 25 years of God's enduring fidelity, and our daily response, in faith and love. 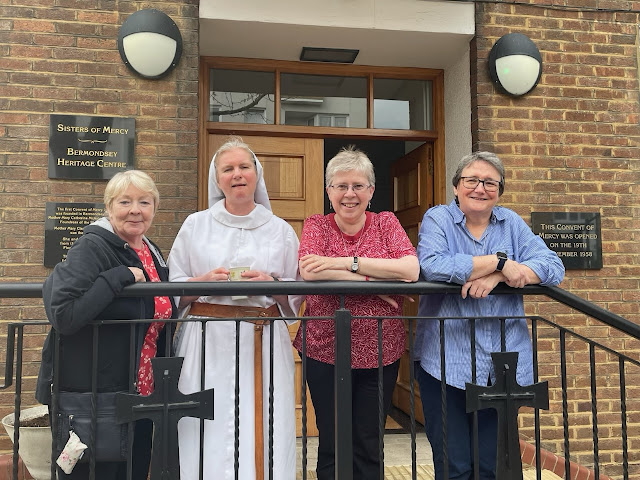 My emphasis is, of course, on the fidelity of God. Yes, I have persevered; despite times of pain and difficulty, I have stayed - am still staying - the course. I have kept my vows, made with such gratitude and joy 25 years and 5 months ago; or rather, I've spent these years seeking to live them as fully and generously as possible. But I know that's not at the heart of why I'm still an RSCJ: God's copious, often unexpected grace and steadfast fidelity are what I have to thank for that. I made my vows Trusting in the fidelity of God and in the love of my sisters, as our vows formula says - and that is how it has been. Just as it has also been in the hardest times, in heartache, loss and anger, that I have come to know, very surely and powerfully, that God is my hundredfold, the supreme, unparalleled 'compensation' for anything I might not have.

That's what I've wanted to say, sometimes managed to say more briefly, whenever people have congratulated me on my twenty-five years. And it's what I wanted to say when I posted the photo on social media for Vocations Sunday, and so many engaged so positively with it. I enjoy and appreciate all the lovely comments, but... I haven't earned them by my own efforts. (Is this weird, or do others feel the same?)

Also on Vocations Sunday, I was present when a seminarian shared the story of his vocational journey. With immense courage and honesty he spoke of his childhood with a violent, alcoholic father and his own struggles with despairing, destructive behaviour, before he eventually allowed the healing, reconciling light and love of God to enter his life. The congregation, mesmerised, was also visibly moved. After their heartfelt round of applause the parish priest started to thank him; then, seeming to run out of words, paused and simply said To God be the glory... Thank you God.

To God be the glory... Thank you God.