Now as then; then as now 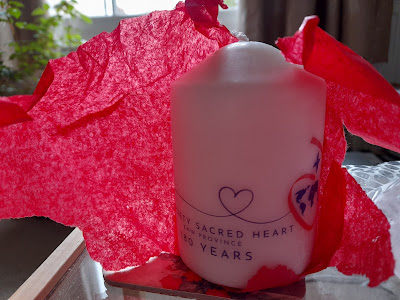 A carefully-wrapped little packet arrived last week. As I peeled back layers of tissue paper, a rather special candle emerged: a birthday candle, in fact, which I, along with my sisters around the country, have been waiting until today to light. One hundred and eighty years ago today, only thirteen years after Catholic Emancipation and twelve years before Pope Pius IX formally defined today's feast of the Immaculate Conception, the first Sacred Heart community was established in this country. On that day, the first small group of RSCJ, plus two pupils and a male servant arrived at their new home in still-rural Berrymead, only a few miles away from where I now live.
We know something of those courageous, pioneering women, thanks to our archives. But I wonder if they ever imagined that, eighteen decades later, RSCJ and members of the Sacred Heart family here and around the world would recall and celebrate their memory with gratitude? And what, I also wonder, would they make of us, their 21st century successors, should a time machine catapult them into 2022?
I imagine they'd be more surprised by the immense changes in their corner of West London than by the appearance of today's religious. After all, they'd have known that forty years earlier our first sisters lived an authentic, whole-hearted, God-centred religious life, whilst not wearing anything resembling a habit. Rather, they'd probably be surprised by some of our ministries: spirituality, counselling, advocacy, healthcare, or educational work outside school settings - but then, they might never have imagined that only thirty or so years later their successors would start a teacher training college!
But in any conversation at depth I imagine there would be no surprises. Whether in 1842 or in 2022, the fundamental spirit and vocation of all RSCJ is the same. Now as then, we are consecrated to glorifying the Heart of Jesus; then as now, we are called to prayer and contemplation, through which we unite ourselves to this Heart whose unlimited love we discover and make known. The means and expression might have changed over the years, but the spirit and vision which led to our foundation shortly after France's destructive Reign of Terror, and which brought those nuns across the Channel, still leads us today, especially in places and situations where love and reconciliation are most needed.
Our foremothers lived according to the 1815 Constitutions, but I can imagine them nodding over the 1982 Constitutions which shape my life and call. I can see the forerunners of 1982 in the original Constitutions, and Aaaahhh... I can hear them say, Yessss... in profound and unsurprised recognition of the same spirituality and charism to which they gave their lives, almost two centuries ago. And Yes, oh yessss... they say, as I read to them some lines from the Conclusion:
In all the circumstances of our life,
wherever our mission leads us
our sole purpose in living is to glorify the Heart of Jesus,
to discover and make known His Love.
Now, as then, and in all the years to come, and sustained by the prayers of the many women who have gone before us, may we all continue to live this grace of vocation as fully, widely and generously as we can, glorifying the Heart of Jesus as we discover and make Love known...
anniversaries and milestones being RSCJ Constitutions encounters Society pin-ups vocation