In praise of... Glad Silvana

on July 08, 2020
Several months ago two of my sisters presented me with a gift from a garden centre they'd visited - a small brown paper bag containing nine little gladioli bulbs. But not just any old bulbs: they'd taken a photo of the display, so I could see that they were for a variety called... Silvana!

Butterfly Gladiolus 'Silvana' has velvety deep pink blooms. A compact sword lily that makes a big impact! says one bulb-selling website, while another adds It is a butterfly type so is slightly more hardy than most Gladiolus... all of which I rather like the sound of. Six years ago I discovered there's a variety of potato called Silvana - now, at last, I can claim impactful, velvety membership of the iris family! And so, after consultation with the green-fingered sister in my community, I planted the bulbs in groups of three in a sunny flowerbed. As I walked back indoors, flattening the paper bag, I felt a slight bulge; a tenth bulb had got stuck in a corner, evading notice when I'd tipped the others out. Where to plant it? It was clearly a bit of a loner, so I quickly interred it in the corner of another bed, beside some herbs. 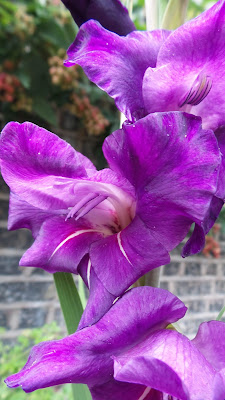 That was early March: within two weeks I had moved out to my current lockdown home. The green-fingered sister began providing me with remote gardening advice, and would also, from time to time, send me updates about the progress of our community's garden. Glad Silvana, I was pleased to hear, was growing and flourishing... and then last week came news that the first one was coming into bloom. I went round to inspect her on Sunday, and have a socially distanced chat with the other sisters. To my delight and surprise I discovered that the first one to flower - the first one to make an impact - was the one which had been last out of the bag; the loner; the one which nearly got thrown away. If I had carelessly crumpled up the bag instead of smoothing it out she could so easily have ended up in the recycling: instead, here she was in all her burgeoning beauty, leading the way and showing the others how it should be done.

And isn't all this a rather lovely little parable? So much in life, so many people, can be all too easily discarded, or simply left behind. It's often said that hardly any of the twelve apostles, as listed in today's Gospel, would have been considered suitable candidates for the mission entrusted to them - but history has shown what a huge impact they were able to have. Rather as with the almost-binned Glad Silvana, a little care and attention, and plenty of nurture, could allow people to bloom and flourish, give joy, and make a big impact, wherever they are planted.