Last Saturday I met a friend who is a Carmelite friar. In a wide-ranging conversation over tea and cake, I suddenly asked him what the Carmelite emphasis is in how they relate to Jesus. Each congregation has some sort of scriptural, doctrinal or devotional core focus, which lies at the heart of their end and mission. This in turn influences our way of regarding and relating to Jesus, individually and communally. I could guess at the Carmelite emphasis, but I decided I might as well hear it from a bona fide OCD.

My friend paused, then started to talk about St Teresa. I marvelled silently at the fact that this 16th century woman has had such an immense influence, not only on the women who follow in her footsteps, but also on thousands of men, over five centuries. This is no mean feat: it's surely a tribute to her huge, larger-than-life personality and heart, and one reason why she's so often referred to and depicted as la Grande, the big one.

But I digress... Teresa's relationship with Jesus, according to my friend, was simply one of friendship. And this made instant sense. She may well have been la grande - an extraordinary mystic, founder, reformer and Doctor of the Church - but she was also, in her relationships, an ordinary, affectionate human, and in Jesus she found her closest, most intimate, ever-present friend, with whom she could live a constant exchange of love.

It made sense because of what Teresa herself had written and said. She is famous for berating God with dark humour after she'd fallen into a river on her travels - if this is how you treat your friends, no wonder you've got so few of them! - which speaks of a confidence and ease born of familiarity. But soakings and scoldings aside, she also, with lovely simplicity, described prayer as nothing else than an intimate sharing between friends; it means taking time frequently to be alone with him who we know loves us.

But it also made sense because I'd glimpsed this ease born of intimacy in the Carmelite nuns I know. Nothing tangible: I've never attended a seminar on this aspect of their spirituality, and we've never discussed it they way I suddenly did with my friar friend; but yes, I had glimpsed the authenticity and simplicity of such friendship in them. And I later remembered that I'd already seen the answer to my question a few weeks ago, when the Carmelite Nuns in Britain had tweeted: Carmelites see Jesus as our friend, companion, lover, who makes it possible to "pray constantly" because he is always present. He is the central focus of our whole life.

And of course, that constant prayer and friendship go hand-in-hand. Each is the source and the fruit of the other; just as prayer is a means and a reason for deepening and prioritising the friendship, and is also its out-flowing outcome. Friendship with Jesus isn't to be enjoyed simply for its own sake, but for the sake of the wider world.

And while I was reflecting on all this, I was reminded of something else... 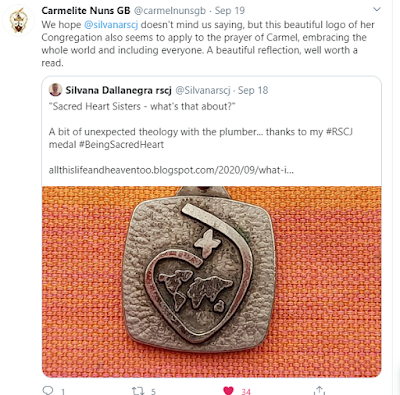 Last month I wrote about showing my medal to someone who'd asked about the Sacred Heart, and using his description of seeing a heart wrapped around the world to explain the Heart of God embracing the world with love. The next day this tweet appeared, and I was delighted... because it seemed so right. And in the past couple of days, whenever I thought about Teresa and her friendship with Jesus, this prayerful embrace of the world gently rose to the surface. And I can feel Teresa saying to me, Just end with that tweet... If you're going to write about friendship with Jesus, this is how you need to end; because this, really, is how friendship with Jesus should end... in a love which is large enough to embrace the world, and everyone in it...

Happy feast of St Teresa everyone... and may her prayers and inspiration help us all to grow in intimacy and friendship with the One who we know loves us.
feasts friendship life online love prayer religious life spirituality Teresa & co